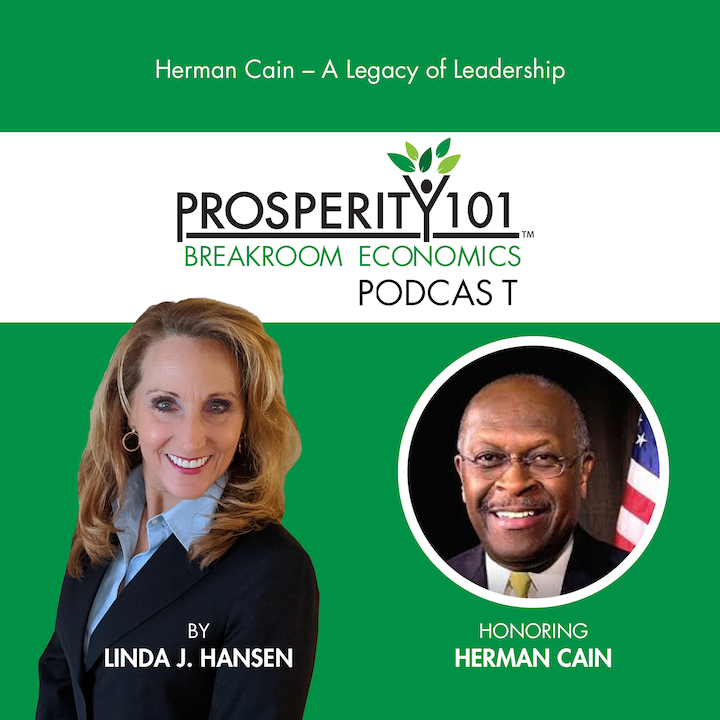 On July 30, 2020, America lost a great leader. Herman Cain. He inspired millions of people around the world with his larger than life personality, signature grin, and common-sense solutions. His love of God, family, and country impacted everything he did, and he taught by example how to erase barriers to achieve success. Linda had the privilege of working with him for twelve years, and in this episode, she shares a heartfelt tribute that will help listeners know why this incredible man had such an impact on our nation.

For information and resources visit: https://prosperity101.com/

The opinions expressed by guests on this podcast do not necessarily represent those held or promoted by Linda J. Hansen or Prosperity 101, LLC.
Transcript

Linda J. Hansen: Thank you again for joining me today.

If you have been listening to my podcasts for long, you know that I typically feature a guest in each episode. This episode is different. Today I want to take time to honor a great man; a man who was a true patriot and who left a legacy of inspirational leadership.

To the nation, he was a larger-than-life personality, but to me he was a dear, dear friend, mentor, colleague, boss, brother in Christ, and someone who became like a second father to me.  I have worked with him over the last twelve years, which has been a true privilege. We have strategized together, laughed together, and prayed together.  And I can tell you – few people have ever made me laugh as much as Herman Cain – and few people have ever earned the respect I have for Herman Cain.

Later in this episode, I will share with you a tribute I wrote to him shortly after I heard the news of his death, but first I’d like to tell you a little more about him.

Herman Cain was born on December 13, 1945 in Memphis, TN, but later moved to Atlanta, GA, with his parents, Luther Cain Jr. and Lenora Davis Cain, who taught him that faith, honesty, integrity, and hard work were the keys to success. They taught him to believe in the American Dream.

Herman Cain graduated from Morehouse College in 1967 and later earned a master’s degree in computer science from Purdue University while working full-time as a rocket scientist, developing fire control systems for the Department of the Navy. (Yes, he actually was a rocket scientist). Though he enjoyed that work, he gravitated towards business. He started with the Coca-Cola Company, then went on to Pillsbury Company where he became a vice president. And he continued to advance his career with an executive position at Burger King and then as CEO of Godfather’s Pizza. His successes led to him being named the President of the National Restaurant Association. Under his term, the group grew significantly.

He was presented the prestigious Horatio Alger Award in 1996 and was also the recipient of numerous honorary Doctorate degrees from prestigious institutions including: Morehouse College, Purdue University, Creighton University, Johnson & Whales University, University of Nebraska, and others. Throughout his life he also served on the Boards of Directors for several organizations including the Federal Reserve Bank of Kansas City where he served as Chairman of the Board, Whirlpool Corporation, Super Valu, National Restaurant Association, Nabisco, Aquila Corp - Utilicorp, Reader’s Digest, Hallmark Cards, AGCO Corporation, and PB2 Foods, Inc.

He captured the attention of the nation when he challenged then President Bill Clinton on health care policy during a televised town hall, and then in 2004 he ran for the United States Senate in Georgia and came in an impressive second.

Mr. Cain then received an opportunity to host a show on Atlanta’s WSB Radio. He also became a columnist and the author of several books. In 2011, he sought the Republican nomination for president, and surprised the political world by rising to the top of the polls. After his campaign, he continued to have a positive impact on our nation on radio, as a keynote speaker, and as a frequent contributor to Fox News, and most recently on Newsmax TV.

Few people knew he was also a licensed minister. Herman Cain passed away on July 30, 2020 - 18 years to the day that he was licensed to preach the Word of God at his lifelong church, Antioch Baptist Church North in Atlanta, Georgia.

He left behind his wife, Gloria, two children, and four grandchildren.

Now I’d like to share with you my tribute to Herman Cain written on July 30, 2020. The day that he passed away.

Herman Cain was one of the finest men I’ve ever known. If anyone has ever wondered what Herman Cain was like, I could sum it up in three words: the real deal.  He was honest, authentic, and loyal.  He was deeply committed to Jesus Christ, his family, and his country – in that order, and everything he did revolved around those priorities.

Our shared faith and the love of country brought an instant bond, and from our first meeting, I knew this man was going to have an incredible impact on my life, and I would potentially have an impact on his, although I had no idea at that time just how true those words would become.

I met him a few years before he ran for president through my involvement in grassroots politics. We spoke at various political events together and he became an advisor and contributing author to a program I developed called Prosperity 101™, which I created to help employers educate employees about the public policy issues that affect their jobs. He believed in my vision and supported my efforts wholeheartedly. We did workshops and speaking engagements together and it was during those times of meeting with people around the country that I could see our nation was crying out for the leadership of Herman Cain.

Our mutual friend and colleague, Mark Block, had also worked with Herman Cain over several years and he believed, as I did, that America wanted a business leader in the White House.  Block and I put together a strategy and took it to Cain, encouraging him to run for president and assuring him that we could take him to number one in the polls.  Of course, he said we were crazy, but he had that signature twinkle in his eyes and that enormous grin, and I knew he was intrigued.  I told him that yes, we were crazy, but I promised we could take him to number one!  To this day, I feel so blessed to be one of two people who recruited him to run for president and then to serve as the Executive Vice President & Deputy Chief of Staff for his presidential campaign, a role that not many women in America had done at that time. He did not care that I was a woman. He trusted my work.

Herman Cain was a man who sought results, and to work so closely with him taught me more than I could have ever learned in a classroom or from any other candidate. We strategized together, laughed together, and prayed together. Some of my favorite memories involved flying with just him and Block during the campaign. We had great strategy sessions at 35,000 feet!

His presidential campaign announcement rally, held on May 21, 2011, was at that time, the largest political rally in the history of our country. Much of the media ignored it, yet as over 15,000 people traveled from all over our country to support this non-politician businessman who was running for president, we knew we were experiencing history in the making. The atmosphere was electric. And I still get chills when I think of it.

While establishment politicians and many media pundits ridiculed us, we diligently kept building a grassroots army that became a movement. Many people had no idea how organized we were at the grassroots level, despite no paid advertising and a limited budget.  Our signature “9-9-9” tax plan became wildly popular, and a greeting to supporters from Chief of Staff Block, that included the famous puff on a cigarette, became a viral sensation. Poll numbers soared.

As Mr. Cain rose in the polls, the unfounded, vicious attacks began. While there was no proof, it damaged the campaign. As a businessman, he knew the odds were not in our favor. He wanted to make sure everyone on the team could be paid through the end of year, so he made a business decision to end the campaign while there was still money to do so. In addition, he wanted to protect his precious wife, Gloria, and their family from additional stress. Being part of the conversations that led to that decision and seeing the love and tender relationship that he and Gloria exhibited during the crisis only caused my respect for him to grow.

We have worked together on many things since then.  In fact, I am blessed to have interviewed him for my Prosperity 101™ podcast just days before he became ill. The episode was published the day he went into the hospital. I hope he was able to hear it.

Mr. Cain (as I have always affectionately called him) was a voice for all that is good and right, and his voice will be missed but never forgotten. I am in shock and fighting tears at the loss of my dear, dear friend and mentor. My heart aches with his family and I ask everyone to keep them in their prayers as they grieve. I thank God for Herman Cain and am thankful for the times we worked together to promote freedom and liberty in our great country.

If you want to honor his memory, please get in the fight for our country. He would want us all to turn to God for wisdom and to do all we can to keep our country free. We must let Herman Cain’s life be an example and be as fearless as he was. May we honor his legacy.

I’d like to give special thanks to Newsmax Media, Inc. for publishing my tribute to Herman Cain. I pray it will be a blessing to many. His love of God, family, and country can continue be an inspiration for us all as we press on to promote the values we share. Let's always remember his love of life, infectious grin, and delightful sense of humor, too. He was a problem solver and a uniting force for good. Let's honor him by trying to do the same!

If you’d like to learn more about Herman Cain, please visit HermanCain.com.

And if you’d like to listen to the previous podcast episodes in which he was featured, please refer to the episodes titled “Stop Dreaming of a Better Yesterday – the Water Tastes the Same,” which was the episode published on the day he went to the hospital, and two episodes entitled “Behind the Scenes with Herman Cain.” I hope you’ll enjoy them.

If you’d like to give a gift to the scholarship fund that was formed in honor of Mr. Cain, please direct your gift to:

Thank you for listening today. I hope you’ve enjoyed learning more about this great leader, and I hope you are inspired to be a leader too.